In light of COVID-19, 3D printer manufacturer Photocentric was awarded a contract by the UK’s national health service (NHS) to 3D print over 7.6 million 3D protective face shields over a six month period. Based in Peterborough, UK, the company has since been putting its proprietary resin-based technology and printing facilities to work and delivered the first batch of face shields.

“I am proud of the ingenuity and hard work demonstrated by the whole team at Photocentric. We have shown that it is possible to use our patented 3D printing technology to very rapidly design and make millions of units of an entirely new product,” said Paul Holt, Managing Director and Founder of Photocentric.

Similarly, Hungarian 3D printer manufacturer CraftBot launched its own Rapid Local Manufacturing Center (RLM) in Cornwall, UK, to produce 3D printed PPE. As well as serving as a manufacturing facility, the center acted as an information hub providing hobbyists across the UK with support and guidance in using their own 3D printers to help alleviate national shortages, which were a serious issue at the time.

As a by-product of the pandemic, 3D printer manufacturer Stratasys announced a major reduction of its global workforce, in the region of 10%, as part of a plan to operate on a “leaner” business model. The restructuring came as a result of the economic fallout caused by COVID-19, with the resizing serving to reduce operating costs and change the company’s financial trajectory to a more profitable one.

Yoav Zeif, CEO of Stratasys, stated: “This reduction in force is a difficult but essential step in our ongoing strategic process, designed to better position the company for sustainable and profitable growth. I would like to express my appreciation to each of the employees impacted by this decision for their dedicated service.”

On the other hand, Californian metal 3D printer manufacturer VELO3D had announced around the same time that it had raised an additional $12M in capital with the addition of new strategic investors, which took the company’s total funding to $150M. The news came alongside an announcement that VELO had received an order totaling $20M for a number of its proprietary LB-PBF Sapphire 3D printers. The sale is still the company’s largest order to date in its almost three-year history, and was delivered to an unnamed aerospace customer.

Also in the U.S., Nextflex, a consortium of companies intent on advancing the 3D printing of Flexible Hybrid Electronics (FHE), entered into a seven-year cost-sharing agreement with the Air Force Research Laboratory (AFRL). The deal entailed the Department of Defense providing $154M in capital to fund the development of 3D printed electronics with a focus on military and defense-related applications.

“We are excited to continue our partnership with NextFlex and its members,” said Dr. Richard Vaia, Chief Scientist for the Materials and Manufacturing Directorate at AFRL. “The Flexible Hybrid Electronic manufacturing ecosystem did not exist five years ago. Today these technologies are not only providing component solutions to our current platforms, but are revolutionizing our design concepts for future transformation capabilities for 2030.”

In the relatively niche, but growing, field of concrete 3D printing, GE Renewable Energy, COBOD, and LafargeHolcim entered a three-way partnership to co-develop and 3D print “record-tall” wind turbine towers. While these towers are typically limited to about 100m in height, the partnership is expected to enable wind turbine towers in the region of 200m, as they will be printed on-site rather than transported. The height increase certainly comes with its perks as well, as a turbine operating at double the height generates around 33% extra energy.

Edelio Bermejo, Head of R&D at LafargeHolcim, stated: “Concrete 3D printing is a very promising technology for us, as its incredible design flexibility expands the realm of construction possibilities. Being both a user and promoter of clean energy, we are delighted to be putting our material and design expertise to work in this groundbreaking project, enabling cost-efficient construction of tall wind turbine towers and accelerating access to renewable energy.”

Finally, aerospace company ArianeGroup, which is a joint venture between Airbus and Safran, successfully tested its first entirely 3D printed combustion chamber. The chamber is featured on the company’s Prometheus aerospace engine, which underwent a total of 14 fire tests between 26 May and 2 June on the P8 test bench of the DLR German Aerospace Center’s Lampoldshausen testing facility.

This article is written by KUBI SERTOGLU
Read the original post here. 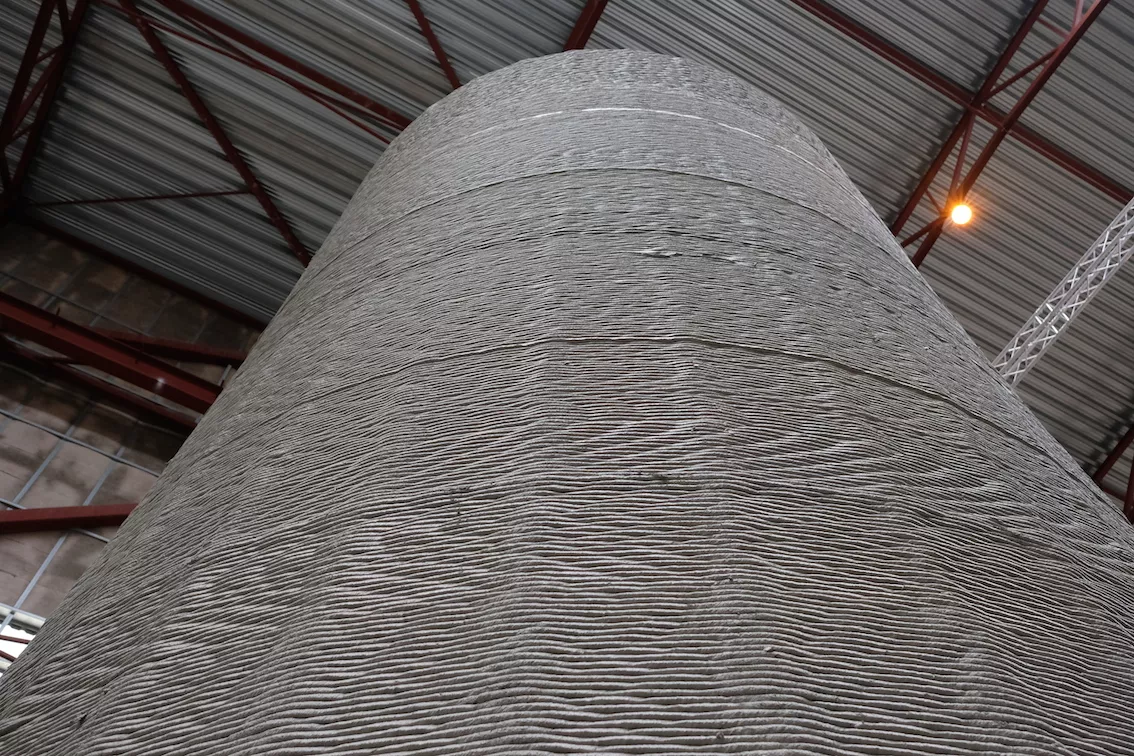